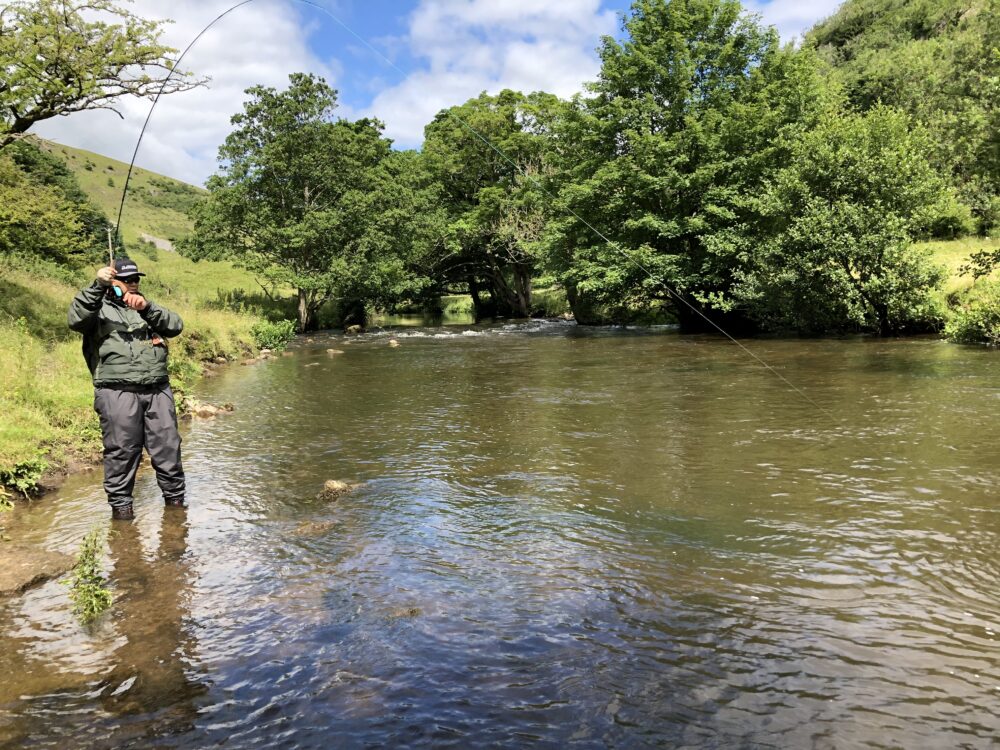 Saturdays client, Anthony wanted to start making the adjustment from reservoir fishing to small river fishing. He was hoping that this would enable him to tackle some of the fabulous little Welsh rivers close to his Liverpool base.

The conditions were kinder to us than they have been of late but the Derbyshire Wye was still brown and lifeless when we got to its banks.

After a quick casting adjustment and a précis of the major differences between the two environments, we were all set.

Anthony had mentioned that if all went well, he wanted to get back and watch his beloved Liverpool try to improve on their massive 90+ points total. No pressure!

With nothing moving on the surface, we fished a small nymph with an indicator.
Within minutes Anthony was into his first ever wild Wye Brownie…however after a brief but spirited battle, it slid away into the murky depths. He was ‘sick as a parrot’.

He ‘hit the post’ twice before finally scoring with a huge Wye Rainbow. Minutes later, he hit the woodwork again with another big Rainbow, similar in size to the first. A few more near misses followed including a hook up on a dry fly but with his expectations exceeded, Anthony blew the whistle and headed for the tunnel.

Anthony’s ‘early bath’ gave me the opportunity to wet a line myself. You’ll be pleased to hear that from here on in, I will dispense with the tortured football metaphor!

As most of the earlier action took place in the slower water, I moved down stream to some deeper sections. The wind had picked up slightly which seemed to quash any chance of dry fly sport so I persevered with the nymph.

It proved to be a short but very productive afternoon session that just like earlier in the day produced the larger fish.
So much so that with the sky blackening and the wind whipping up, I too ‘blew the whistle’ early. “Ooops!” 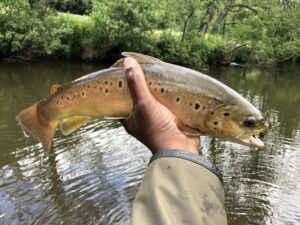