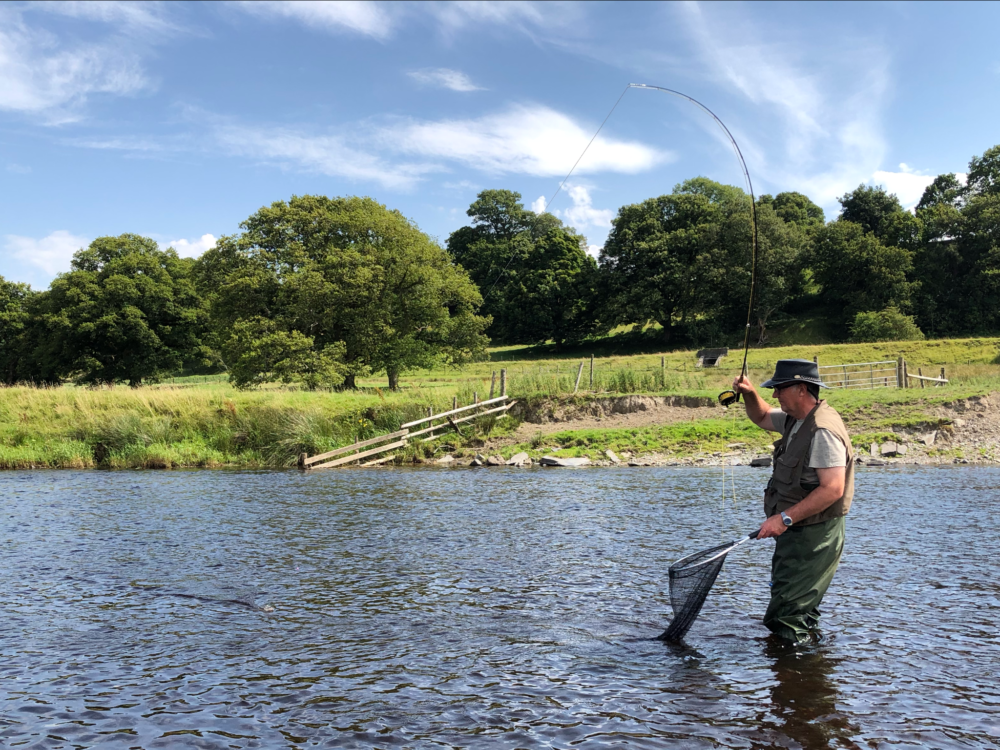 After doing some guiding further downstream, I moved up river to the Bala stretches of the river Dee on Friday. I met up with good friend and fellow Hoylake Flyfishers member Ron to explore some of the excellent waters that can be accessed by the members of the Hoylake Flyfishers Club. These waters are controlled by Bala and District Angling Association and are also available on a day ticket from a few places including the The Bryntirion Inn in Llandderfel and Siop YGwyniad fishing tackle shop on Bala High street.

Barry who owns the shop is both very knowledgable and very helpful. He told me that there are very good Grayling on this stretch so Friday’s mission was to try and find some.

The temperature was an unbearable 30 degrees and this long, canal-like stretch offered little protection from the wicked downstream wind which made casting and controlling the flies extremely challenging. It did however help to cool us down.

Fortunately, the spot where we started and ended the day was just behind one of the few bends in the river and so we were afforded some shade from the trees and some respite from the 7 m/s breeze.

The conditions weren’t really screaming ‘dry fly’ and there were no signs of surface feeding fish so Ron went for a suspended nymph and I chose 2 flies on the French leader.

It was clear that the fish were anchored to the bottom so it was no surprise that the French leader set-up took the first fish. What was a surprise however was its quality. A perfect example a mature, unmarked pewter coloured Grayling that was in peak condition.

Ron had mentioned earlier that he’d ‘dabbled’ with French Nymphing but hadn’t ever done it with the right equipment. As I generously set about demonstrating the finer points of the technique with my rod, another big, quality Grayling took the point fly.

Ron snatched the rod from my grasp and immediately began trawling the exact same water. Alas, he wasn’t quite so lucky and whilst he experienced a few exhilarating plucks at his flies, he would have to wait a while longer for his own moment of triumph. I did though, manage to magically summon an Otter to swim directly in front of us so that was some consolation.

With still miles of river to explore, we decided to move on up stream in search of some fresh, fishable water.

We made our way up the field and were pleased to see lots of ladders and styles to get over the fence to the river. However, accessing the river itself wasn’t always easy and had the river been any higher, we might have been restricted to fishing mostly from the bank. There were a few notably easy access points however, like the one up at the weir which is where we stopped to fish and have lunch.

Having consumed his sandwiches earlier, Ron was eager to get on and fish and it was while I was eating my butties that I noticed he’d hooked into a decent Grayling. How very selfish!

I abandoned my sandwich and went down to record the event. The Herculean battle resulted in a new personal best Grayling for Ron and he was justifiably pleased. There was no stopping him now and he was soon into another good Grayling after losing a Trout.

We worked our way back downstream but with only a few takes and a couple of smaller fish to the net. This long, fairly featureless stretch would probably offer fantastic dry fly sport if the fish were rising but today’s conditions made it difficult to fish.

It was early evening by the time we got back to the original spot and although the temperature had dropped, the wind seemed to be increasing. That said the water just above where we started looked like prime dry fly water and so even though nothing was rising, I tied on a dry and made some exploratory casts.

After just a few casts, I watched a dull shape follow my fly downstream about 4 feet then gently snatch it from the surface. During the fight, I could see that it was a good sized, wild, Bala Brown Trout and when I inspected it in the net, it was again in perfect condition. I was so excited that I got out of the water and sat on the bank for half an hour to relive the event.

By now Ron had worked his way up river prospecting with a similar dry fly and I was gazing calmly out across the water… until I saw a really good fish rise. With Ron’s permission, I got back in to cover it and on the second drift, another huge Grayling came up and devoured my fly.

That was me done. What a fantastic day!

It really doesn’t get much better. Thanks to Ron, Hoylake Fly Fishers and Bala and District Angling Association for making it such a memorable day.