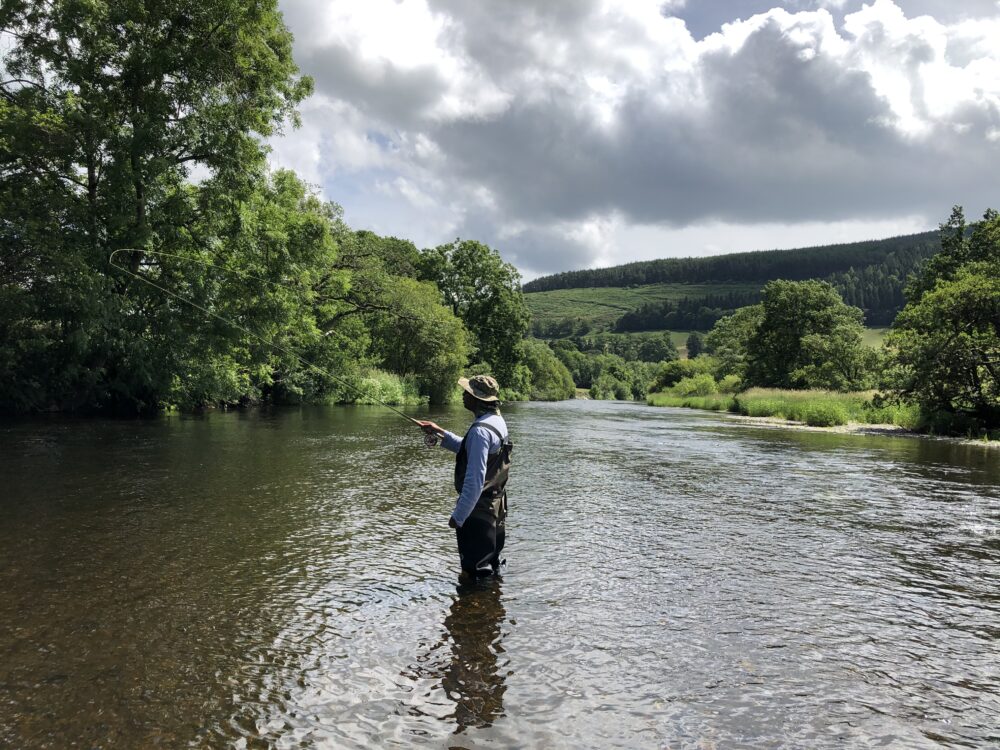 When we first start Flyfishing we initially see big improvements in skills as the learning curve is steep. However, as we gain more and more experience, improvements are not so noticeable and we sometimes feel that we’ve hit a plateau.

I recently had the pleasure of guiding two very experienced Flyfishermen. Both wanted to improve their Nymphing skills, so they could ‘add another string to the bow’. By pure coincidence, they both fish the southern chalk streams around Salisbury and they had each booked a two day fishing visit to North Wales within a week of each other.

Ian had dabbled with fishing a single nymph on the chalk streams and was keen to get to grips with French Nymphing. So, armed with his trusty sage rod and a brand new french leader, we set about tackling the discipline over a couple of days on a shrunken river Dee.

The summer conditions played right into our hands as very few fish were seen rising so there was no temptation to set up the dry rod.
In such situations, a searching method like French Nymphing can prove a valuable addition to a fly fishers armoury.

We explored every likely looking spot, riffle and run and with each cast, Ian’s accuracy and line control improved. By the end of the second day, he had near perfect control of the nymphs and their drift and was rewarded with some cracking fish. The best was a Grayling of around 2lb which, after an epic battle, snapped the tippet just before we couple get it into the net.

Salman also had a desire to work on his Nymphing skills but he was leaning more towards the duo and suspended Nymphing techniques.

However on his first day, there was slightly more surface activity than there had been for a while so we took the opportunity to makes some tweaks to his casting first.

Whilst fishing a dry fly, we were able to improve his understanding of rod mechanics, the casting stroke and line control. This not only brought some good fish from some very tricky sections of river, but it would also stand him in good stead for the next days’ Duo or ‘Klink and Dink’ session.

A slight lift in the river height on Salman’s second day killed the dry fly fishing so the duo was the perfect approach. Salman was now reaping the benefits of the previous days ‘refresher’ and he was again rewarded with plenty of good fish including one spectacular Brown Trout. Fish of such quality are rare on that section of the Dee and those that are there are not easily fooled. It just confirms that the presentation must have been spot on!

Well done to both Ian and Salman. The improvements they both made over the couple of days were immense.