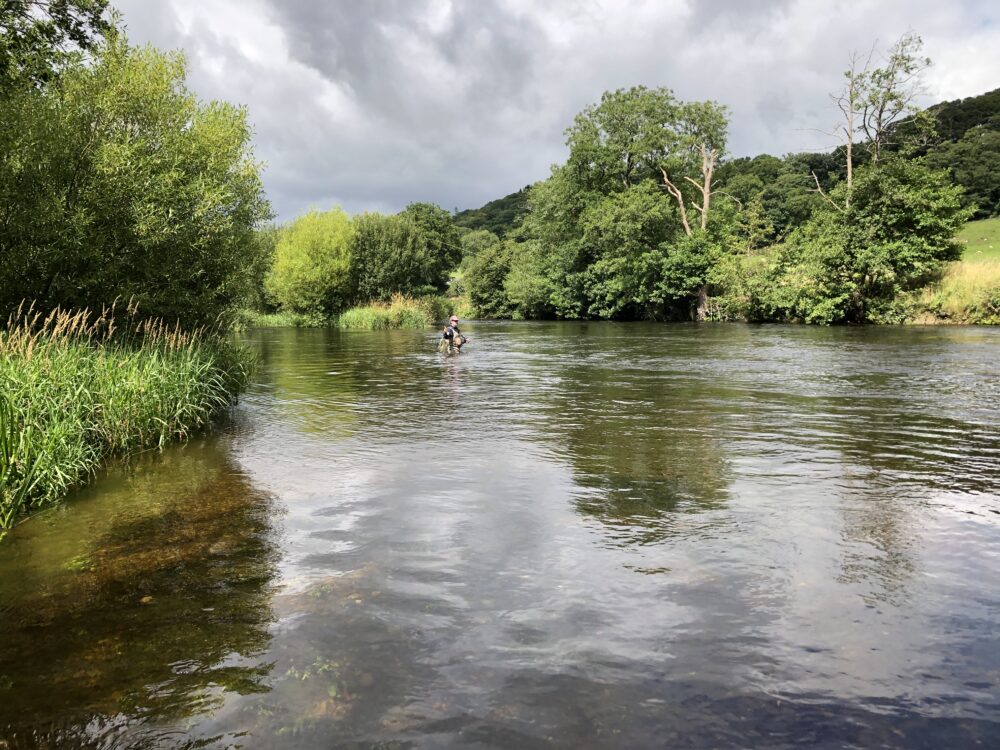 Part of the joy of fly fishing and guiding is that no two days on the river are the same. It’s never boring but some days are more eventful than others. Today was eventful.

Toby, a regular visitor to North Wales was accompanied on this trip by his wife Fiona. He had planned an earlier visit with his American cousins but that had to be cancelled due to the Covid travel restrictions.

I was excited about the day as the river had been fishing exceptionally well and even though there had been heavy rain the day before we met, the Corwen river gauge was showing that the river height had remained constant so I had the day all mapped out in my head.

As we made our way down to the river, a farmer on the other bank pointed out a sheep that was stuck in the mud in the river by our bank. It was too silty for us to get in but after a brief conflab, Toby was striding purposefully towards his 4×4 to acquire his trusty tow rope. He skilfully lassoed the hapless beast and after a bit of wrangling, we hauled the sheep up onto the bank.

Rather than stick around to thank us, the sheep immediately went to tell his friends of our bravery, unfortunately taking Toby’s treasured tow rope with him. A Benny Hill-style chase ensued but we were unable to corral the beast, which despite its recent trauma was surprisingly agile. I called the land owner and was assured that someone would come out and ‘sort it’.

I was feeling a tad guilty as it was I who was holding the rope when the sheep made its dash for freedom but those feelings of guilt subsided slightly when Fiona revealed that she’d broken the clip on my favourite landing net.

I figured it was time to head for the river.

On arrival at the beat, the river was substantially higher than expected and I later discovered that the Corwen gauge was stuck at 0.51 and the river had risen by 20 cms.

There was a reasonable wind and absolutely no fly life or surface activity so we brushed up on casting and river craft before having a half hearted go with a dry fly.

After a fruitless morning session we decided to have lunch. Our trek back to the car took us though the field of our earlier sheep adventure. To our dismay, not only had the farmer not been to ‘sort it’, the sheep had now managed to get one of its hind legs entangled in the rope too. This was our chance. We approached with all the confidence and stealth of recent winners of “One man and his dog” but the sheep clocked us and tried to blend in with the others. In fact, I would say the other sheep were assisting him as several of them acted as decoys, running in different directions to confuse us. Eventually though, I had him cornered. There we were, eye to eye, man and sheep. I approached him slowly, arms outstretched as if I knew what the hell I was doing.

All the other sheep fell silent as they watched the events unfold. I managed to get to within about six feet of it before he gave me the ‘double shimmy’, shot past my flailing arms and again melted back into the flock. Out manoeuvred by a 3 legged sheep with a noose around its neck…the shame!

The other sheep immediately closed ranks and became very vocal again as if they were taunting me. Another message was sent for a more professional outfit to deal with the situation.

So, fishing!
In short, it was a very tough day. We made several fly and venue changes and covered lots of stuff that would undoubtedly pay dividends on a different day. Fortunately, Fiona and Toby were like me, happy to be in such lovely surroundings and in such good company and it’s fair to say we lost all track of time.

Eventually, their persistence paid off and we were able to put a few fish into what was left of my net.
They weren’t monsters by any means but they were beautiful examples of wild Trout and Grayling and they were very welcome.

A few good larger fish were hooked and lost but as often happens, the activity stopped as quickly as it started and soon, all was quiet again. So with flies now getting caught up in the trees in the bank-side vegetation, it was clear tiredness was setting and we called time on an eventful session.

Please note: for legal reasons, I’m no longer allowed to photograph sheep so no Ovine pictures will appear in this blog.