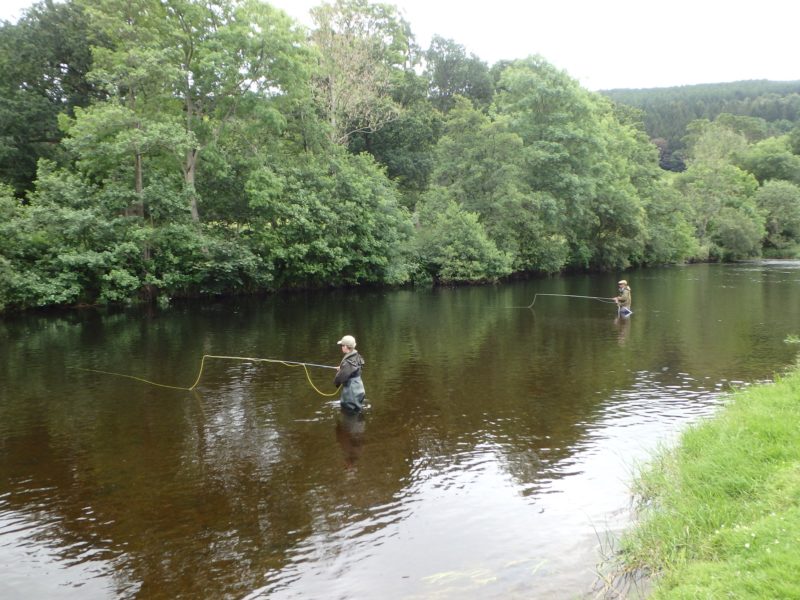 Today was to be a full day with both a morning fishing lesson and an afternoon casting lesson. But what should I do in the evening?

First up was with Father and Son Richard and Dickie. Having already had a couple of casting lessons with me, they were keen to put their new found skills to the test.

Considering young Dickie hadn’t touched a fly rod until a few weeks ago, he’d made remarkable progress especially as he rose and pricked 3 fish in todays ultra tricky conditions. He was very unlucky not to get one in the net.

With only a few rising fish spotted, we were forced to search the likely looking water with dries and eventually, it paid off. Richard placed a delicate cast in the foam line under some over hanging branches and out of nowhere came a feisty little Wild Brown Trout.

I left father and son having lunch before resuming their assault on the river Dee and I am eagerly awaiting photos of Dickies first fly caught fish. Watch this space!

Casting on a river usually requires some additional skills to ensure that the fly behaves naturally as it moves down river. My afternoon client, George did well to cope with the different current speeds and scenarios that the river challenged him with. He then went off to fish on his local river… and so did I!

I headed downstream of the teaching beat to Crogen 3 which is one of the Corwen and District Angling Club (CADAC) day ticket waters. As it was already late afternoon, the plan was really just to ‘reacquaint’ myself with it after the floods. The river had changed quite a lot as a result of the floods and some of the ‘familiar’ stretches of the river bed were very, very different.

On the plus side, it was like fishing a brand new river in places and even though the was more walking than fishing, I still managed a few fish.

Buoyed by my success and fearing the Friday evening traffic, I went upstream of the Cilan Bridge to fish one of the other day ticket stretches, Crogen 2. Again it was different to how I’d remembered it but I immediately encountered rising Grayling on the flats that I was able to target with a dry fly.

Access points had to be chosen carefully as there were some deep stretches and the eroded banks had deposited silt along the edges of the river that made for some very soft areas. A good poke with the wading staff is the best way to avoid ‘over moisturising’ whilst your finding your feet!

Again, there were some obvious and not so obvious fish lies but the only way to check them is to fish them!

Day tickets are a mere £20 each for some of the best Grayling fishing the U.K. has to offer. for more info visit CADAC site and scroll to the bottom of the page.