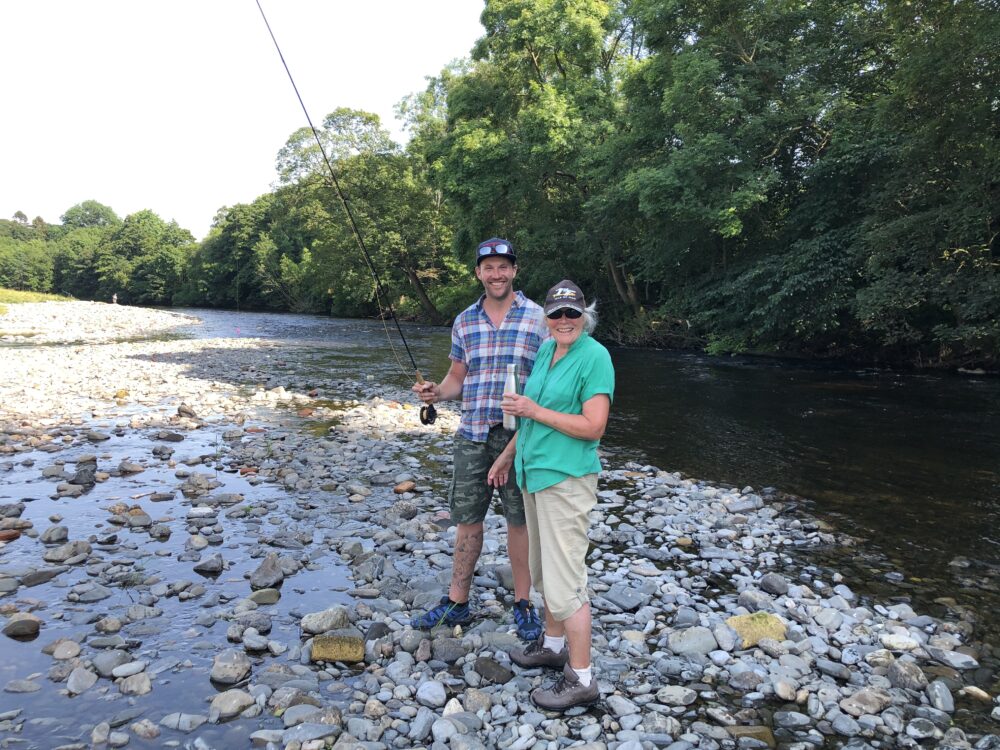 I’ve always been someone who tries to stay positive and I often say that “If god gives you lemons, make lemonade”. In other words, always try to make the best of a bad situation.

The weeks first ‘Lemon’ was the guy who booked a day on the river and just didn’t turn up! Cancellations are unavoidable but it’s selfish not to give proper notice as it also deprives someone else of an opportunity to of fish at what is for me, the busiest time of the year.

However, as my personal lemonade glass is always half full, I took the opportunity to fish myself in the morning, dodge the holiday traffic by heading back early afternoon and take care of a few outstanding jobs. Result!

Additional lemons were thrown in the shape of the fishing conditions. They’re just about as tough as they could be at the moment, searing hot sun, low clear water and hardly any fly life. That said, the remainder of the week was filled with people who’s light, effervescent personalities reminded me of the very drink I’ve been referring to in this now, tortured metaphor.

Tuesdays client, John was given a days fly fishing as a birthday gift from his family and was keen to improve his skills on the river. John made some huge improvements to his casting and presentation and despite the difficult conditions, managed to tempt 4 good grayling into taking his fly. There are no trophy shots though as none of them made it to the net but as he left he was planning another day on the river whilst he’s visiting the area.

Wednesday was spent in the company of Phil and his mum Sue. Being proper outdoors people, they’d always wanted to try Flyfishing so thoughtful Phil bought his mum a days Flyfishing for 2 as her Xmas present.
Again, the sun was relentless but they braved it and after learning to cast and getting some tips and a live demonstration from local fly fishing vlogger Eòin Campbell, we had a go ourselves. Sadly, we only managed one tiny little Brown Trout between us but again, Sue and Phil will definitely reap the rewards later as they continue their fly fishing journey.

Throughout the week, the pattern was forming. The fishing was definitely better during the cooler mornings than it was in the hot afternoons but we’d needed the morning session to get to grips with casting etc.

With Thursday clients, it was slightly different. I contacted Toby and Fiona and suggested that we cancel the usual bacon butties and head straight for the river, confining our fishing to the first half of the day.

My suggestion was well received as Fiona’s last fishing experience is now referred to as ‘boil in the bag’ due to the rather ungainly, rubberised waders that she was forced to wear.
There was a lot riding on the success of Thursdays session as Toby wanted Fiona to love fly fishing as much as he did.

I’m pleased to report that, sporting her new breathable waders and matching boots, Fiona took to fly fishing like a duck to, er… water.

A couple of great Grayling on the dry were the result of a tremendous improvement with her casting.
Sensing that he was losing ground, Toby then made some modifications to his own technique which saw him sending out effortless, accurate casts that that barely disturbed the water.

What a great week!

With many of my friends and colleagues complaining about the current conditions, it just proves that there are no negatives to time spent on the river. Well done to all of this weeks fly fishers!