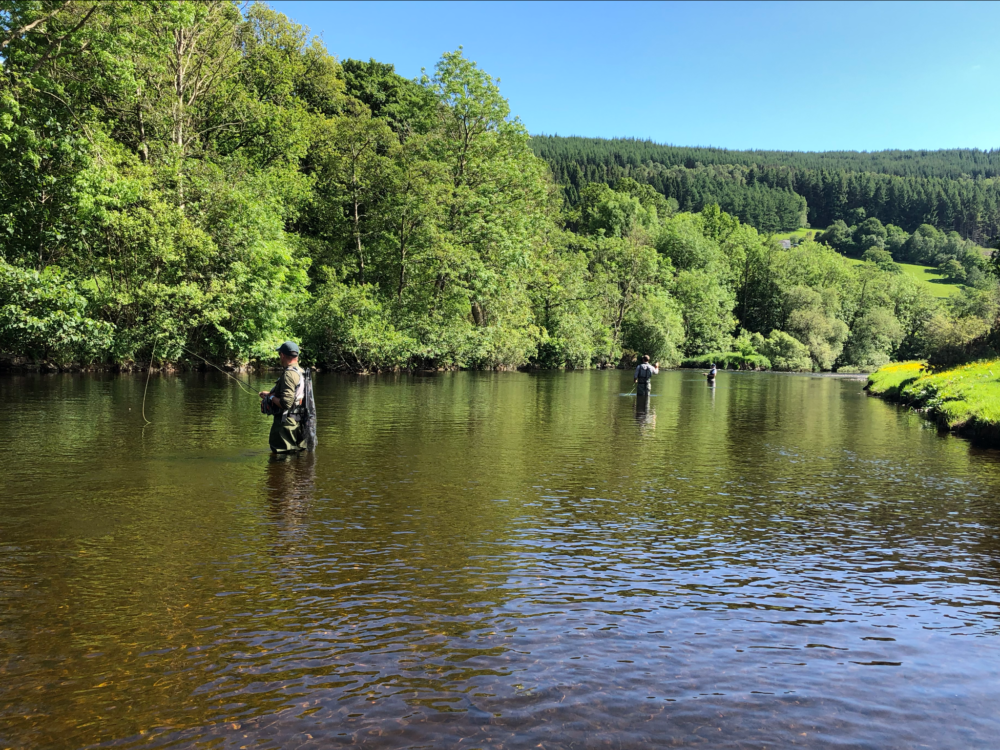 It’s been a very busy couple of weeks that have produced a number of milestones, firsts and personal bests for clients.

Amongst them were several returning clients and I’m delighted to say that they were all treated to better conditions than those they experienced on their previous visits. They’ve all in the past battled the extremes of floods and droughts and although they worked hard and learned new skills at the time, their efforts went largely unrewarded.

Currently, the Dee is at its summer level so the fishing hasn’t exactly been easy. Generally we experienced some activity early on in the day and late in the afternoon but as is the norm in summer, we also experienced those long Dog Day afternoons when the fish just totally switched off.

Fortunately, some of that time was taken up by some very relaxed and very civilised riverside lunches.

Jona was given a return visit to the Dee as a present by his wife and this time he brought 2 friends. Experienced fly fisher Andy and relative beginner Jim. Jim not only caught his first Grayling but went on to catch several each one bigger than the last.

Jona himself had some great fish and also improved on his PB whilst Andy had a PB Grayling and caught one of the best Trout I’ve ever seen come from our chosen stretch of the Dee.

Toby was also back again and his guest Peter not only caught his very first Grayling, but managed to land a couple of real specimens. Not to be outdone, Toby also caught his best ever Grayling with a flawless dry fly presentation on some tricky water.

Richard and Vicky also enjoyed a much busier time than our previous session up on the River Eden. A first Grayling for Richard and some massive improvements with presentation and casting and whilst Vicky too was casting like an expert, she was very unlucky that none of the fish she hooked stayed on long enough to get to the net.

Dave too was back after several years fishing stillwaters. His goal was to learn some river Nymphing techniques. Even though his particular day turned out to be cold, wet and windy, he still managed a few good Trout and Grayling to flies he’d tied himself. Most pleasing was the Grayling that took a self tied Perdigon nymph that he’d tied some time ago but had never fished.

Also let us not forget Tina who after our session at Chirk, went off on her own and caught her very first solo Trout.

The fishing hasn’t been easy by any stretch of the imagination but it just shows that if you do the right things at the right time, there’s always a chance of a reward.

Well done to all!