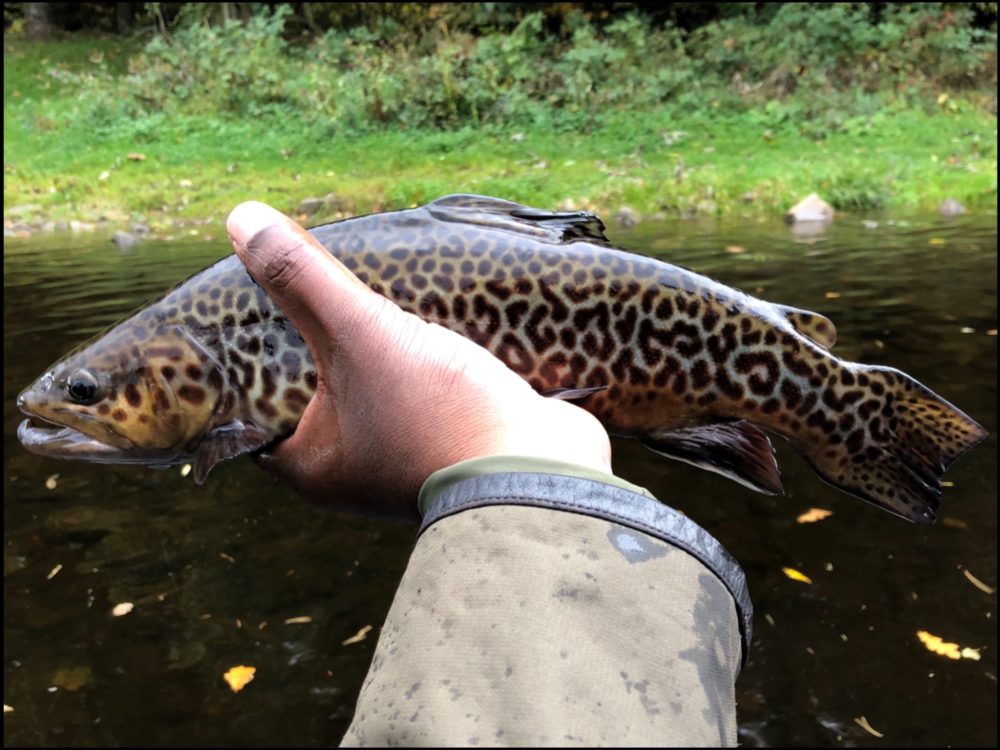 Following last years nymphing masterclass with Jan Šiman, Chiara and I wanted to explore more of the wonderful and varied Otava river.

This time we enlisted the services of one of Jan’s excellent local guides Karel, for our first day to re acquaint ourselves with the techniques and the area.

His knowledge and ability were confirmed when during his demo, he caught a fish on his second cast.

After a brief refresher, he suggested we got fishing ASAP as there was heavy rain forecast for later and the river was already raised and coloured from the previous days rain.

He was right and after about 90 mins the heavens opened and we were forced to call it a day just before lunch time.

With the fishing postponed, we decided to get Karel to show us some decent areas to target later in the week and he duly obliged with 4 or 5 potential venues that looked perfect.

Later that afternoon, the weather changed again and we were suddenly presented with another window of opportunity so we quickly got back into our waders and jumped in.

Within an hour it was raining hard again and this time it had set in for the remainder of the day and unfortunately the whole night. However, during that brief, clear spell, I managed to catch a cracking Tiger Trout on a cased caddis.

Just prior to last years trip, there was an incident with a local fishery that resulted in 100s of fish escaping into the river. The locals filled their boots as they were relatively easy to catch and many were quickly caught and removed.

When Karel and Chiara returned from upstream, he was very excited to see this fish. Not only because of its size but also the distance it had traveled from where it had originally entered the river. This Tiger Trout was clearly thriving in its new surroundings and put up a proper scrap.

Earlier in the day an excited Karel had sent several texts to his fishing buddies about a huge Rainbow that Chiara had hooked but sadly lost after a brief battle. This fish sparked another texting frenzy.

We spent most of the morning searching for a fishable spot after the previous days downpour. Anybody that was out fishing was doing so from the bank as the river was now raging and chocolate brown as opposed to yesterday’s steady tea stained flow.

Thanks to some modern geotagging technology, we eventually navigated ourselves back to a lovely open and shallow spot we’d fished with Jan the previous year.

The first couple of hours were largely fruitless but as the day warmed and the river dropped, we were rewarded with 60 minutes of glorious but difficult dry fly sport to fussy Trout & Grayling.

Then suddenly the temperature dropped again, the tiny flies stopped hatching and it was all over.

Our last day was booked on the Trophy water, a section of the river known for holding some very large, albeit stocked fish. This was supposed to be limited to 10 anglers but with the river mostly in flood and the man who sells the day tickets for the other waters away on holiday, it seemed very, very busy.

After finding a spot with only one other angler visible, we began kitting up and were immediately approached and quizzed by the local bailiff. He was soon satisfied by our papers and passes and got down to the important business of selling us some must have, killer flies for this water. Not wanting to upset him, Chiara invested heavily. And it’s a good thing she did as they did indeed work really well.

We crossed the river and walked downstream to a spot that to me, just screamed fish. Chiara got in there and I went downstream to find another ‘banker’ run. On my return Chiara had had 5 good fish including a beautiful Brookie and I was on a blank.

We left the ‘honey hole’ and tried to find another decent stretch that wasn’t occupied or hadn’t already been dredged. This water was clearly subject to substantial angling pressure on the day and we only caught fingerlings in the spots we could actually get into.

As we made our final, rather despondent walk back to the car, we noticed a chap just about to vacate the only spot we’d had any real success in all day. Even though his time there appeared to yield nothing, we managed another 5 fish which I’m putting down to advanced technique as opposed to sheer luck.

Overall, another great trip tainted only by the vast amount of rain we had just prior to and during our visit.

The people were friendly and helpful, the fishing is fantastic, the area is beautiful and the fishing is reasonably priced. I’m sure we’ll go back again.